Because there are many myths surrounding breast cancer, women may get confused about following prevention and treatment precautions.

Every year, about one million and 380 thousand new cases of breast cancer are recorded, and 458 thousand deaths occur due to it, of which 269 thousand are in developing countries. That is, most deaths are recorded in poor and developing countries, and this is due to a lack of awareness of the disease and late detection of it, which reduces the likelihood of recovery and raises the risk of death.

Breast cancer occurs when some cells in it begin abnormal growth as a result of a mutation or change in genetic material, and then spread to the rest of the breast areas and to the lymph glands, and from there to other parts of the body. Breast cancer usually begins in the cells of the ducts that produce milk, and may also begin with glandular tissue in the breast.

And the incidence of breast cancer is not limited to a specific age, young girls also get it. And because there are many myths surrounding this type of neoplasm, women may get confused in following prevention and treatment precautions.

The German Federal Center for Health Education says that early diagnosis increases the chances of curing breast cancer, so women should undergo periodic examinations starting at the age of 30.

While lumps and swellings are the most common symptoms of breast cancer, there are other possible signs that should be noticed when visiting a doctor.

In her report published by the magazine “reader’s Digest“, in its Australian edition, writer Lisa Milbrand said that in a widely circulated post on social networking sites, only one symptom of a woman who had cancer appeared, represented by the protrusion of dimples on the edges of her breasts.

In general, it is possible that women overlook this sign of a tumor during a monthly self-examination. In this context, oncologist Dr. Anita Johnson pointed out that the doctor should examine any boils or shrinkage that appears on the skin of the breast.

According to the author, there are many reasons that can contribute to skin irritation, such as wearing an unsuitable bra and getting heat rash, contact dermatitis, or other skin problems.

In rare cases, skin irritation can be a symptom of breast cancer. In this regard, gynecologist Jessica Shepherd stated that “it is imperative to visit a doctor when Strange redness, swelling, skin irritation, itching or rashes on the breasts are observed for longer than expected”. 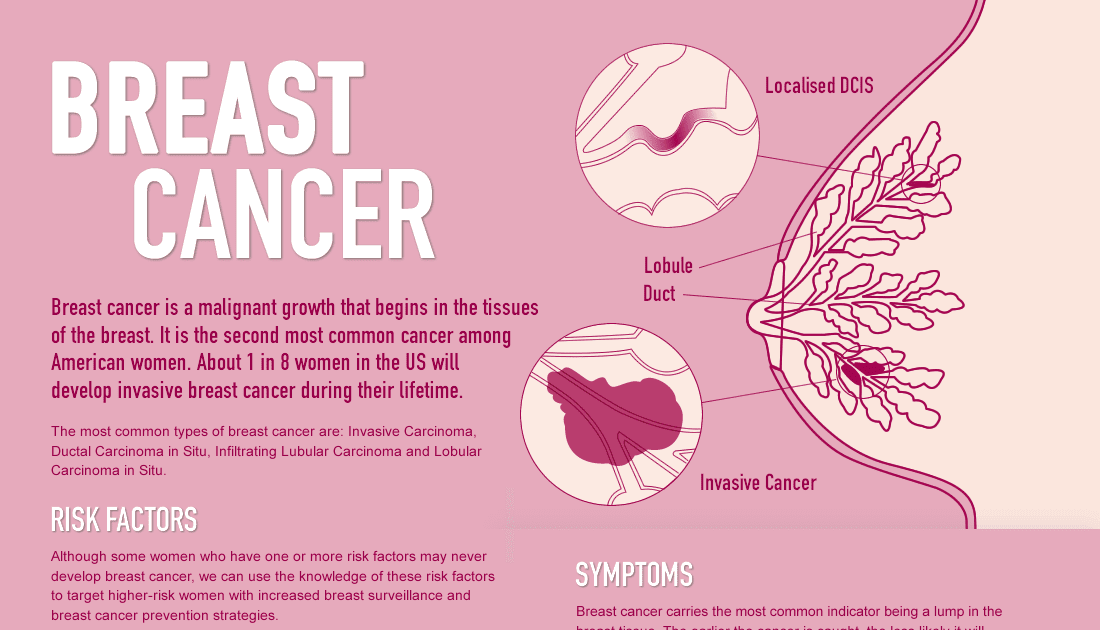 Nipple discharge from the breast

The author added that you should not worry about breast discharge if you are pregnant or are going to breastfeed your baby, but for other women, the doctor should examine certain types of discharge. “Nipple discharge that is green or yellow in color or with blood coming out of it can be a symptom of breast cancer,” Dr. Shepherd said.

Dr. Johnson noted that the appearance of dark marks and freckles on the skin is not just a sign of the need to visit a dermatologist, but can be an indicator of the presence of a rare and more aggressive form of breast cancer called inflammatory breast cancer.

Johnson added that if you notice the appearance of new spots of freckles, it is imperative to consult a doctor, and Johnson continued her speech, saying that “the incidence of inflammatory breast cancer is rare. Therefore, there is no need to panic,” he said.

Johnson stated that other symptoms of inflammatory breast cancer can include the appearance of red spots or bruise-like marks on the skin. “Get an appointment with a doctor if these red spots spread and stay for more than two to 3 weeks,” Johnson suggested.

On the other hand, it must be borne in mind that this type of cancer is rare, as many types of red spots that appear on your skin, such as cherry hemangioma, can be completely benign.

The occurrence of changes in the nipple of the breast

The author reports that the shape, size, or color of the nipples of the breast changes only in the event of pregnancy. In contrast, Dr. Shepherd said, “if you notice any changes in The Shape of your nipples, you should get a breast cancer screening. These changes can include a contraction or constriction of the nipple”. For her part, Dr. Johnson stated that the feeling of itching and the appearance of crusts on the nipples of the breast may be a sign of Paget’s disease, which is a rare form of breast cancer.

Johnson continued, ” this disease can appear in the form of crusts on the nipple or a dry layer of skin, either on the nipple or the skin around it, or on both, and may cause tingling or a burning sensation. And in fact, there are many reasons for the feeling of itching in addition to the appearance of crusts on the breasts. Therefore, try to talk to your doctor about the fears you have,” he said.

The author explained that it is possible that changes in the skin of the breast are a sign that something is wrong. In this context, Shepherd said that “breast cancer can sometimes cause a change in breast tissue. Redness of the skin and bumps appear due to inflammation of the breast tissue due to the presence of cancer cells that would block the small lymph channels inside the breast, accumulating fluid,” he said.

Breast swelling or pain is a common issue for women during the menstrual cycle, and it can even be a sign of early pregnancy. For this reason, women usually overlook this sign as a symptom of breast cancer. Shepherd advised that “if one of the breasts looks enlarged or swollen, then you should have a breast examination. If the tumor is deep, you may not feel it. On the other hand, you may experience some swelling”.

“It’s possible that you don’t notice a lump in the breast, but if you feel a lump under the armpit, it’s probably a sign of an enlarged lymph node. Moreover, the tumor may be a sign of the beginning of the spread of breast cancer. And when doing a monthly breast self-examination, you always need to check for lymph nodes under the arms,” he says.

Change in breast size or shape

Johnson explained that weight gain, changes in the menstrual cycle, pregnancy, or breastfeeding can affect the size and shape of your breasts. If the shape of your breasts changes suddenly for no reason, it could be a sign of cancer. Therefore, you need to make an appointment to visit your doctor and do an examination. Johnson added that “it could happen a week before menstruation. Therefore, you need to wait a week after the end of menstruation to see if the breast will return to its normal size. In contrast, if this change occurs in both breasts, it is most likely not due to breast cancer,” he said.

The inspiring story of a woman who survived breast cancer